A podcast about horror–in real life AND in the movies–from an LGBT perspective.

About FriGay the 13th Horror Podcast

Each episode, co-hosts Matty and Andrew tackle a real-life horror theme (racism, capitalism, current politics, etc.) and attack it from an LGBT point of view. In each episode’s second segment, the boys dissect two horror movies that connect to that theme. And in between? Lots of silly gay nonsense!

Since February 2018, FriGay the 13th Horror Podcast has rocketed past 77,000+ listens, with a dedicated listenership that is growing very steadily. What Andrew and Matty have discovered in producing the show is just how HUGE the LGBT horror community really is– and how hungry they are for some representation in an environment that can be often be skewed to white, cis/hetero dudes. FriGay the 13th Horror Podcast is positioned uniquely in the market with a keen focus on current affairs in addition to horror, and it’s been cool to have people (especially LGBT people) come along for the ride.

Andrew is our resident horror nerd and hails from the great white North that is Northern Michigan. He now resides with his husband Michael and their fur baby Sonoma in Chicago where he works in marketing. He enjoys all things horror and some of his favorite movies are things like Friday the 13th, Candyman, and The Descent, amongst many others. He also enjoys a good cheddar cheese, a run outside and spending time with his friends. 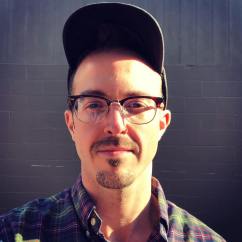 Matty Zaradich is originally from Indiana, and has lived in Chicago for well over a decade. Matty is an activist and LGBT advocate, working with various organizations to secure non-discrimination protections for LGBT people across the United States. Matty loves traveling, distance running, drinking good wine, and hanging out with his dearest friends and family. He has been known to read poetry in group settings at the drop of a hat–whether folks like it or not. His favorite horror film? Hands down, THE EXORCIST.

Please reference the hosts in the following manner: